The tasselled wobbegong (Eucrossorhinus dasypogon) is a species of carpet shark in the family Orectolobidae and the only member of its genus. It inhabits shallow coral reefs off northern Australia, New Guinea, and adjacent islands. Reaching 1.8 m (5.9 ft) in length, this species has a broad and flattened body and head. Its most distinctive trait is a fringe of branching dermal flaps around its head, which extends onto its chin. The fringe, along with its complex color pattern of small blotches and reticulations, enable it to camouflage itself against the reef environment. 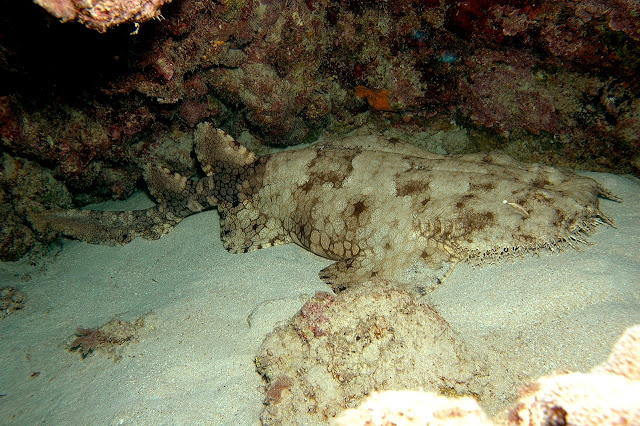 During the day, the solitary tasselled wobbegong can generally be found lying inside caves or under ledges with its tail curled. Individual sharks tend to remain within a local area and have favored resting spots. While resting, it opportunistically ambushes nearby fishes and invertebrates, and also lures in prey by waving its tail to mimic the appearance of a small fish. At night, it emerges and actively forages for food. This species is aplacental viviparous, though little is known of its life history.

The tasselled wobbegong has been reported to bite and kill humans unprovoked; attacks may result from people accidentally disturbing the shark or being misperceived as prey. The International Union for Conservation of Nature (IUCN) has listed this species as Near Threatened,[when?] as outside of Australia it is threatened by fisheries and habitat degradation. As of 2015, its IUCN status is Least Concern.

With several records of apparently unprovoked attacks on people, the tasselled wobbegong has a reputation beyond other wobbegongs for aggressive behavior. Gilbert Whitley even wrote in 1940 that it “attacks and generally kills the natives” of Papua New Guinea.Though Whitley’s claim is questionable, this species is certainly capable of inflicting severe wounds. Conversely, the tasselled wobbegong is also an ecotourism attraction and many divers have approached it without incident. Given this shark’s cryptic appearance and poor vision, humans should exercise caution to avoid accidentally harassing it or causing it to mistake a hand or foot for prey. This species adapts well to captivity and is occasionally found in the home aquarium trade.

The tasselled wobbegong has little economic value, though its attractive skin is occasionally used for leather.[2] In Australian waters, it is not fished and faces minimal threats. However, elsewhere in its range it may be negatively affected by extensive fishery activity and habitat degradation from pollution, blast fishing, and coral removal. Because of these concerns, the International Union for Conservation of Nature (IUCN) has assessed this species as Least Concern.