The Ring of Fire includes the Pacific coasts of South America, North America and Kamchatka, and some islands in the western Pacific Ocean. Although there is consensus among geologists about almost all areas which are included in the Ring of Fire, they disagree about the inclusion or exclusion of a few areas, for example, the Antarctic Peninsula and western Indonesia. 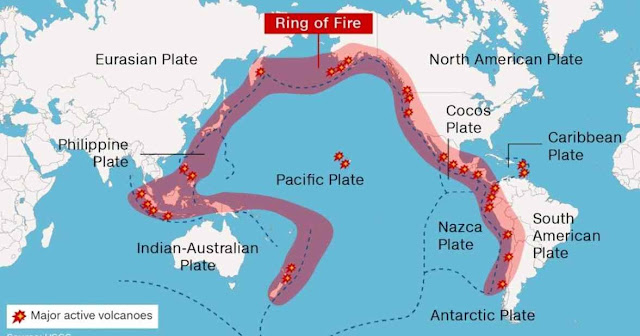 The Ring of Fire is a direct result of plate tectonics: specifically the movement, collision and destruction of lithospheric plates under and around the Pacific Ocean. The collisions have created a nearly continuous series of subduction zones, where volcanoes are created and earthquakes occur. Consumption of oceanic lithosphere at these convergent plate boundaries has formed oceanic trenches, volcanic arcs, back-arc basins and volcanic belts.

Most of Earth’s active volcanoes with summits above sea level are located in the Ring of Fire. Many of these subaerial volcanoes are stratovolcanoes (e.g. Mount St Helens), which are formed by explosive eruptions of tephra, alternating with effusive eruptions of lava flows. Lavas at the Ring of Fire’s stratovolcanoes are mainly andesite and basaltic andesite but dacite, rhyolite, basalt and some other rarer types also occur.Other types of volcano are also found in the Ring of Fire, such as subaerial shield volcanoes (e.g. Plosky Tolbachik), and submarine seamounts (e.g. Monowai).

The world’s highest active volcano is Ojos del Salado (6,893 m or 22,615 ft), which is in the Andes Mountains section of the Ring of Fire. It forms part of the border between Argentina and Chile and it last erupted in AD 750.Another Ring of Fire Andean volcano on the Argentina-Chile border is Llullaillaco (6,739 m or 22,110 ft), which is the world’s highest historically active volcano, last erupting in 1877.

Top 10 Most Dramatic Footage of Natural Disasters Caught on Camera

Magnitude 6.2 earthquake strikes off the coast of Baja California, Mexico

Top 10 Most Dramatic Footage of Natural Disasters Caught on Camera